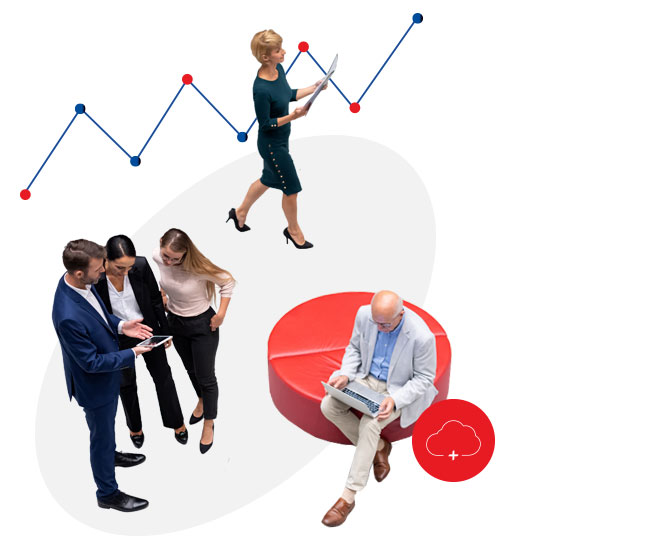 In order to maintain comparability of data, the interest income was adjusted: income on non-Treasury bonds which is recognized in the financial statements in income from debt securities was transferred to income on financing granted to customers.

In 2020, interest income went down by PLN 232 million in connection with the judgment of the Court of Justice of the European Union in respect of the consumer’s right to reduce the cost of the loan in the event of repayment of the loan before the deadline specified in the loan agreement.

Interest expense amounted to PLN 1 148 million and was PLN 797 million lower than in 2019. The lower interest expense was mainly the effect of a drop in the costs of the deposit base of PLN 751 million y/y, which resulted from lower PLN interest rates after the decisions of the MPC.

The interest margin decreased by 0. 44 p.p. y/y and amounted to 2.95% as at the end of 2020. The decrease in the margin results from lower returns on assets in effect of changes in the structure of interest-bearing assets (the share of securities with the lowest interest rates increased mainly at the expense of the share of amounts due to Customers bearing the highest interest rates). Additionally, interest margin decreased as a result of a drop in net interest income due to the decrease in market rates in Poland which to a larger degree translated into a drop in interest on assets than on liabilities. In 2020, the average interest rate on PKO Bank Polski S.A. loans was 3.8% (2019: 4.6%), and the average interest rate on total deposits was 0.3% (2019: 0.6%).

In 2020, operating expenses amounted to PLN 5 180 million and were 1.1% y/y lower. Their level was mainly determined by:

Regulatory costs include the result of regulatory burdens.

The effectiveness of operations of PKO Bank Polski measured with the C/l ratio on an annual basis was 40.2% and improved by 0.6 p.p. y/y in consequence of lower operating expenses (+1.1% y/y) and a higher result on business activities (+0.4% y/y).

The net write-downs for credit risk and non-financial assets were PLN -2 451 million and were PLN 1 367 million higher than in 2019, mainly as a result of write-downs recorded in connection with COVID-19 and impairment of: the shares in Bank Pocztowy, goodwill (which arose as a result of acquiring Nordea Bank Polska) and real estate. The share of impaired loans amounted to 4.5% as at the end of 2020 (+0.1 p.p. y/y).

Expenses on selected types of services

Total assets, and total equity and liabilities of PKO Bank Polski amounted to PLN 345 billion at the end of 2020 and increased by PLN 28 billion since the beginning of the financial year. Therefore, the bank reinforced its position as the largest financial institution in the Polish banking sector. On the assets side, the bank noted an increase, mainly in the securities portfolio, and on the side of sources of finance the increase was determined mainly by the increase in the deposit base.

Major line items of the standalone statement of financial position:

At the end of 2020, financing granted to customers amounted to PLN 207.0 billion, which marked a decrease of PLN 7.8 billion y/y.

The volume of retail and private banking loans decreased by PLN 1.8 billion and related to real estate loans, with a lower level of corporate loans (PLN -4.7 billion) and loans to firms and enterprises (PLN -1.1 billion).

Corporate loans include non-Treasury bonds (other than held for trading).

Retail and private banking loans, and corporate loans were the main items in the structure of financing by type, with shares of 54.9% and 37.0% of the portfolio as at the end of 2020 respectively.

Amounts due to customers constitute the basic source of financing of the bank’s assets. At the end of 2020, amounts due to customers amounted to PLN 278.9 billion, which is an increase of PLN 26.0 billion since the beginning of the year. The main factor that contributed to the increase in the deposit base was an increase in retail and private banking deposits (PLN +23.0 billion) and deposits of business entities (PLN +12.1 billion), accompanied by a decrease in deposits of corporate entities (PLN -9.1 billion).

In the structure of customer deposits by type, the main items are the retail and private banking deposits (70.3% as at the end of 2020). The share of current deposits in the break-down of total deposits increased to 82.2% (+11.8 p.p. compared with the end of 2019).

PKO Bank Polski has been an active participant of the debt securities market for many years, which enables it to diversify the sources of financing its operations and to adapt them to the regulatory requirements regarding long-term financial stability. In 2020, borrowings decreased by PLN 0.9 billion, as a result of:

Detailed information on the issues conducted by PKO Bank Polski and loans received is provided in the Financial Statements of PKO Bank Polski for the year ended 31 December 2020 (in Note 39).